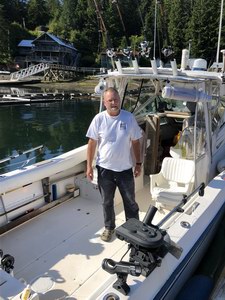 While no firm decisions regarding recreational fisheries management in the northwestern Vancouver Island area for the 2022 season have been made, there is every reason to think that at a minimum the management regime will remain the same as in recent years, except with a strong possibility that the halibut limits might be more generous. No formal forecasts have yet been made for either WCVI origin chinook or coho but DFO’s Salmon Outlook document is encouraging for these stocks. Here’s a look on a species by species basis at the season ahead.

Chinook salmon
Consistent with the past three years, beginning April 1 it is expected that the same overarching management regime featuring widespread chinook non-retention around southern BC will begin, this to minimize encounter rates of mostly Fraser River stocks of concern. Kyuquot is shielded from the worst of this because these fish do not migrate along WCVI nearshore waters so full limits ( 2 chinook/day, 4 in possession) remain in effect year round there. Outside the surfline chinook possession will come back into effect July 15, opening up the offshore fishery if desired.

The 2021 season was remarkable because essentially Beach House boats never went offshore to go after salmon because the chinook fishing along the surfline (Spring Island, Thornton Islets, Rugged Point) was consistently productive all summer long, and there’s every reason to think 2022 will offer more of the same. The reason for this is that last summer there were large schools of both juvenile needlefish and herring along the rocks – after a 5-year absence the local needlefish stock appears to be bouncing back after being wiped out due to the massive warm water event called the Blob, and the herring spawn in local waters over the past few springs has been steadily increasing. The north Pacific Ocean was in a moderate La Nina phase this past winter, bringing cooler waters which should ensure the continued rebuilding of these important bait species – perhaps we might see the Reef fishery (5-6 km outside Lookout Island) turn back on for the first time since 2015 as the adult needlefish population becomes re-established on the vast gravel banks there.

Local WCVI origin chinook do migrate along the surfline, dominated by hatchery stocks from the Conuma, Stamp and Nitinat rivers. In short, there’s every expectation that the nearshore chinook fishing in the summer ahead will be as productive or better than it was last year.

Coho salmon
The local WCVI stocks are some of the strongest around southern BC, and consistent with past years retention of both wild and hatchery coho inside the surfline is expected for 2022. Any uncertainty relates as to whether one or two wild fish are allowed to be retained in the daily limit (which won’t be determined for several months yet) and to what degree the coho decide to spend time in the waters near Kyuquot. We’ve seen large differences between years even as returns to WCVI rivers have consistently been strong – just take it as a given that if the coho do settle in around the rocks near town Beach House boats will be chasing after them with light gear, especially trolling skip flies right on the surface for maximum excitement!

Halibut
The halibut stock in the NE Pacific Ocean is on a bit of an upswing now, driven in large part by recruitment of the very strong 2012 year-class fish. These are now averaging 15lbs. and will drive the fishery for some years to come. The national total allowable catch for 2022 to Canada increased somewhat and so the recreational fishery share has increased similarly. While it is not expected that the daily limits will change there is an expectation that the maximum size in the larger fish category will increase a little, allowing for a larger halibut to be retained, however this won’t be determined for another month or so. Regardless of what the final regulations are we already know that at a minimum retention opportunity in 2022 will be the same as last year, with the expectation of more smaller sized halibut around.

Lingcod
Last year the daily limit for lingcod was increased back to 3 fish per day and many Beach House guests went home with their possession limit of twice that. Fishing around the nearshore rockpiles in relatively shallow water was consistently productive, avoiding the need for long trips out to the 50 Fathom Line to work jigs in deep water and there’s every expectation that lingcod fishing in 2022 will be similar to last season.